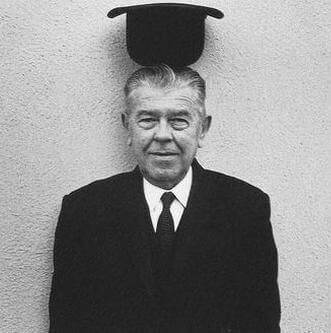 Surrealism originated in the late 1910s and early '20s as a literary movement that experimented with a new mode of expression called automatic writing, or automatism, which sought to release the unbridled imagination of the subconscious. Officially consecrated in Paris in 1924 with the publication of the Manifesto of Surrealism by the poet and critic Andre Breton (1896-1966), Surrealism became an international intellectual and political movement. Breton, a trained psychiatrist, along with French poets Louis Aragon (1897-1982), Paul eluard (1895-1952), and Philippe Soupault (1897-1990), were influenced by the psychological theories and dream studies of Sigmund Freud (1856-1939) and the political ideas of Karl Marx (1818-1883). Using Freudian methods of free association, their poetry and prose drew upon the private world of the mind, traditionally restricted by reason and societal limitations, to produce surprising, unexpected imagery. The cerebral and irrational tenets of Surrealism find their ancestry in the clever and whimsical disregard for tradition fostered by Dadaism a decade earlier.

Surrealist poets were at first reluctant to align themselves with visual artists because they believed that the laborious processes of painting, drawing, and sculpting were at odds with the spontaneity of uninhibited expression. However, Breton and his followers did not altogether ignore visual art. They held high regard for artists such as Giorgio de Chirico (1888-1978), Picasso (1881-1973), Francis Picabia (1879-1953), and Marcel Duchamp (1887-1968) because of the analytic, provocative, and erotic qualities of their work. For example, Duchamp's conceptually complex Bride Stripped Bare by Her Bachelors, Even (The Large Glass) (Philadelphia Museum of Art) was admired by Surrealists and is considered a precursor to the movement because of its bizarrely juxtaposed and erotically charged objects. In 1925, Breton substantiated his support for visual expression by reproducing the works of artists such as Picasso in the journal La Revolution Surrealiste and organizing exhibitions that prominently featured painting and drawing.

The visual artists who first worked with Surrealist techniques and imagery were the German Max Ernst (1891-1976), the Frenchman Andre Masson (1896-1987), the Spaniard Joan Miro (1893-1983), and the American Man Ray (1890-1976). Masson's free-association drawings of 1924 are curving, continuous lines out of which emerge strange and symbolic figures that are products of an uninhibited mind. Breton considered Masson's drawings akin to his automatism in poetry. The Potato of 1928 by Miro uses comparable organic forms and twisted lines to create an imaginative world of fantastic figures.

About 1937, Ernst, a former Dadaist, began to experiment with two unpredictable processes called decalcomania and grattage. Decalcomania is the technique of pressing a sheet of paper onto a painted surface and peeling it off again, while grattage is the process of scraping pigment across a canvas that is laid on top of a textured surface. He used a combination of these techniques in The Barbarians of 1937. This composition of sparring anthropomorphic figures in a deserted postapocalyptic landscape exemplifies the recurrent themes of violence and annihilation found in Surrealist art.

In 1927, Rene Magritte moved from Brussels to Paris and became a leading figure in the visual Surrealist movement. Influenced by de Chirico's paintings between 1910 and 1920, Magritte painted erotically explicit objects juxtaposed in dreamlike surroundings. His work defined a split between the visual automatism fostered by Masson and Miro (and originally with words by Breton) and a new form of illusionistic Surrealism practiced by the Spaniard Salvador Dali (1904-1989), the Belgian Paul Delvaux (1897-1994), and the French-American Yves Tanguy (1900-1955). In The Eternally Obvious, Magritte's artistic display of a dismembered female nude is emotionally shocking. In The Satin Tuning Fork, Tanguy fills an illusionistic space with unidentifiable, yet sexually suggestive, objects rendered with great precision. The painting's mysterious lighting, long shadows, deep receding space, and sense of loneliness also recall the ominous settings of de Chirico.

In 1929, Dali moved from Spain to Paris and made his first Surrealist paintings. He expanded on Magritte's dream imagery with his own erotically charged, hallucinatory visions. In The Accommodations of Desire of 1929, Dali employs Freudian symbols, such as ants, to symbolize his overwhelming sexual desire. In 1930, Breton praised Dali's representations of the unconscious in the Second Manifesto of Surrealism. They became the main collaborators on the review Minotaure (1933-39), a primarily Surrealist-oriented publication founded in Paris.

The organized Surrealist movement in Europe dissolved with the onset of World War II. Breton, Dali, Ernst, Masson, and others, including the Chilean artist Matta (1911-2002), who first joined the Surrealists in 1937, left Europe for New York. The movement found renewal in the United States at Peggy Guggenheim's (1898-1979) gallery, Art of This Century, and the Julien Levy Gallery. In 1940, Breton organized the fourth International Surrealist Exhibition in Mexico City, which included the Mexicans Frida Kahlo (1907-1954) and Diego Rivera (1886-1957) (although neither artist officially joined the movement). Surrealism's surprising imagery, deep symbolism, refined painting techniques, and disdain for convention influenced later generations of artists, including Joseph Cornell (1903-1972) and Arshile Gorky (1904-1948), the latter whose work formed a continuum between Surrealism and Abstract Expressionism.

The Son of Man

The Treachery of Images

The Mysteries of Horizon

Not To Be Reproduced